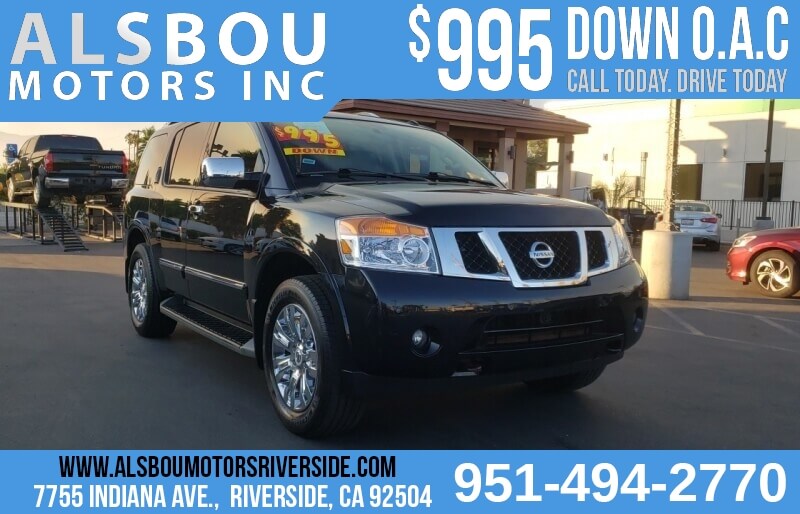 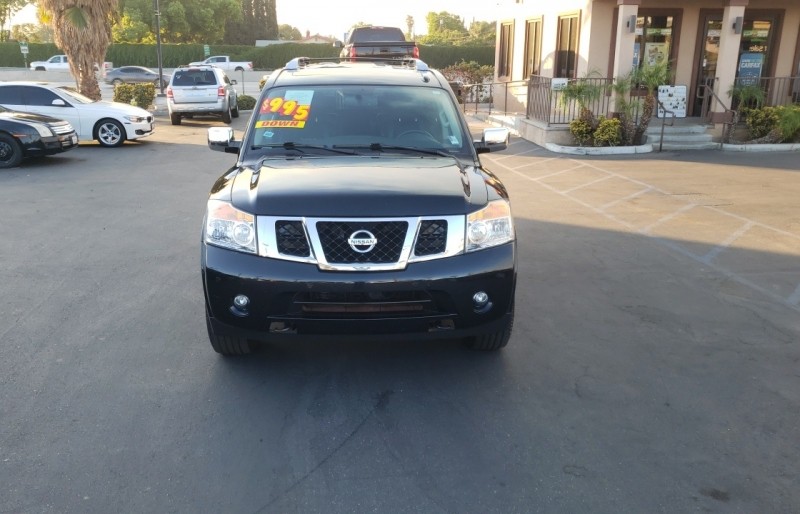 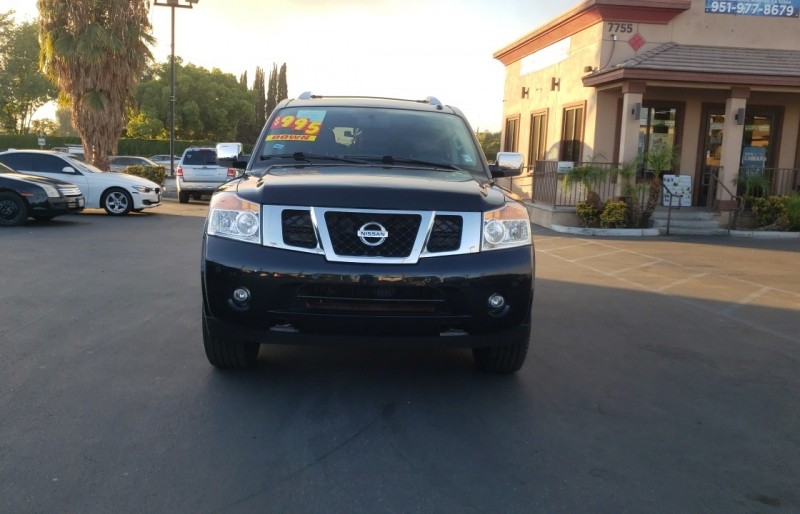 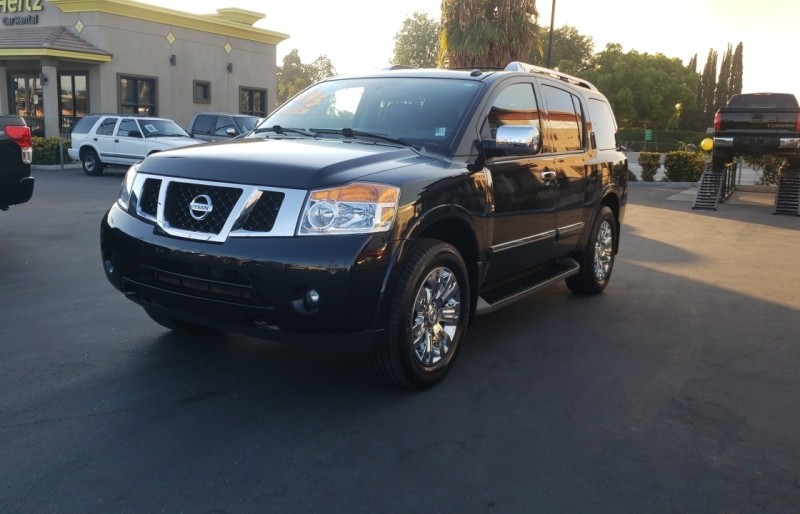 Though the 2015 Nissan Armada is a capable full-size SUV, it's outclassed by newer truck-based rivals as well as the latest crop of crossover SUVs.

Although full-size SUVs like the 2015 Nissan Armada aren't necessarily a great option for everyday family transportation, they continue to find homes in plenty of driveways across America. These heavyweight sport-utility vehicles are well suited for buyers who want to tow a boat or a trailer and carry a large family at the same time. If that's your lifestyle in a nutshell, the eight-passenger Armada will certainly meet your needs, though we'd steer you to a couple of its newer competitors first.

The key to the Armada's capability is a truck-type body-on-frame design, which it shares with Nissan's Titan full-size pickup along with its 5.6-liter V8 engine. A properly equipped Armada can tow up to 9,000 pounds. While that's an impressive number for this class, the big Nissan loses points for its overly stiff ride, poor fuel economy (it's worse than rivals in this regard) and low cargo capacity.

Our top picks for a full-size SUV are the 2015 Toyota Sequoia and Ford Expedition. The Sequoia isn't much better in the fuel economy department, but it's a supremely comfortable vehicle that excels at transporting both people and cargo. The Expedition has a high tow rating of its own and that, along with an updated cabin with roomy quarters for passengers and an efficient new turbocharged V6 engine, makes it better than ever for 2015. You may also want to look at the newly redesigned Chevrolet Tahoe and GMC Yukon siblings.

It's important to keep in mind, though, that due to their size and weight, all of these vehicles can be cumbersome to drive in crowded areas, and regardless of which powertrain you choose, you're not going to see 20 mpg very often. For these reasons, the majority of buyers would be better served by a large crossover like the 2015 Chevrolet Traverse, Mazda CX-9 or Toyota Highlander. These car-based vehicles have as much or more interior room than any of the traditional SUVs above. Plus, they return better fuel economy, they're easier to drive day-to-day, and they'll typically cost you less money up front and down the road on maintenance.

Bottom line, the 2015 Nissan Armada will do the job for buyers who need a capable SUV to haul a trailer and the family. However, it's not the best full-size SUV on sale in 2015, and buyers who don't truly need its heavy-duty capabilities will likely find that a large crossover is far more enjoyable to drive in the everyday grind.

The 2015 Nissan Armada is a full-size SUV offered in three trim levels: base SV, midrange SL and top-of-the-line Platinum. All give you the choice of two-wheel (rear-wheel drive) or four-wheel drive. Depending on the seating configuration, the Armada can seat seven or eight.

The 2015 Nissan Armada is powered by a 5.6-liter V8 engine that produces 317 horsepower and 385 pound-feet of torque. A five-speed automatic is the only available transmission. Buyers have a choice of rear-wheel drive or a four-wheel-drive system with low- and high-range gearing.

With either drivetrain, fuel economy is disappointing even for a large SUV. The EPA's fuel economy estimates are 15 mpg combined (13 city/19 highway) for two-wheel-drive models; buyers in certain U.S. states will encounter flex-fuel (E85-compatible) 2WD Armadas that are rated just 12 mpg city on regular gasoline. All 4WD Armadas are rated at 14 mpg combined (12/18). Depending on the configuration, the Armada can tow up to 9,000 pounds when properly equipped.

The 2015 Nissan Armada comes standard with antilock disc brakes, traction and stability control, front seat side-impact airbags, full-length side curtain airbags and front seat active head restraints. Rear parking sensors are standard on all 2015 Armadas, while front parking sensors come on the top Platinum trim level. A rearview camera is optional on the base SV with two-wheel drive and comes standard on everything else.

Piloting the 2015 Nissan Armada is about what you'd expect from an old-school SUV. The 5.6-liter V8 engine delivers beefy performance with brisk acceleration and ample passing and merging power. Fuel economy, however, can be downright abysmal.

The Armada's ride quality is generally good on pristine roads, but it deteriorates quickly over broken pavement, where it's at a significant disadvantage compared with newer competitors in this class. Handling is ponderous with the Nissan's supersize dimensions, and its heavily weighted steering makes it a handful in tight spaces. Granted, all full-size SUVs suffer from these same ills to one degree or another, and that's why we encourage shoppers who don't need huge towing capacity to opt for a large crossover that's both easier to drive and more fuel-efficient.

The 2015 Nissan Armada offers an eight-passenger cabin that's attractive and well put together. Gauges and controls are logically arranged and intuitive, though Platinum models equipped with the navigation system have an overload of buttons.

Seat comfort for front and second-row passengers is quite good. There's plenty of head- and legroom with either the 40/20/40-split second-row bench or the Platinum model's optional twin captain's chairs (which drop seating capacity to seven). However, the 60/40-split third-row seat is short on legroom compared with the third-row accommodations in other large SUVs.

Folding down all those rear seats gives the Armada 97 cubic feet of cargo space. While this number may sound impressive, it's actually much less room than you'll find in the Nissan's rivals.