Premium Package! Driver Assistance Package!
Save this car Email Us Book a test drive Get e-price Get Finance Print 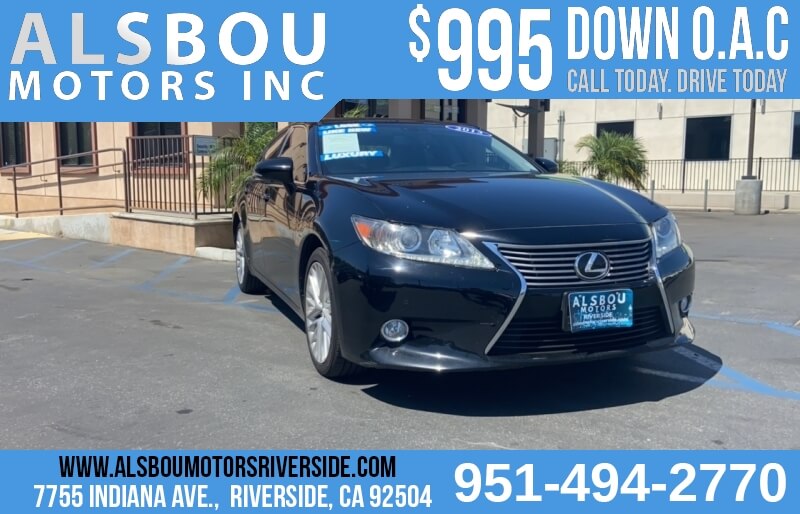 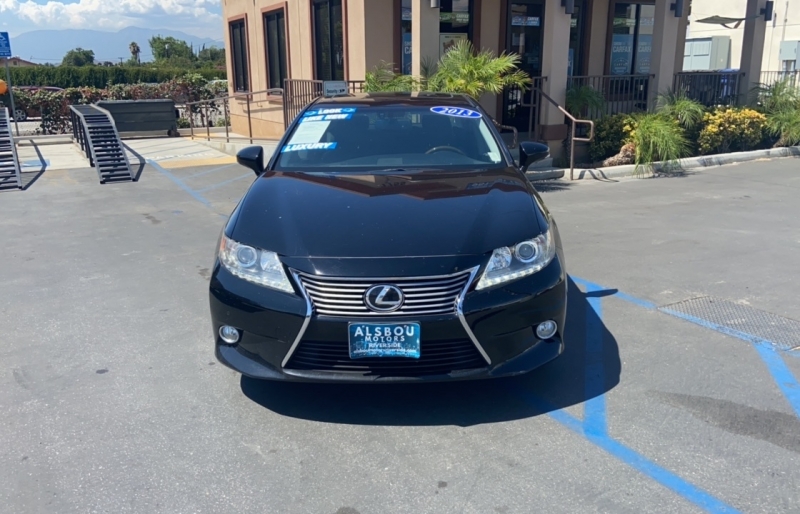 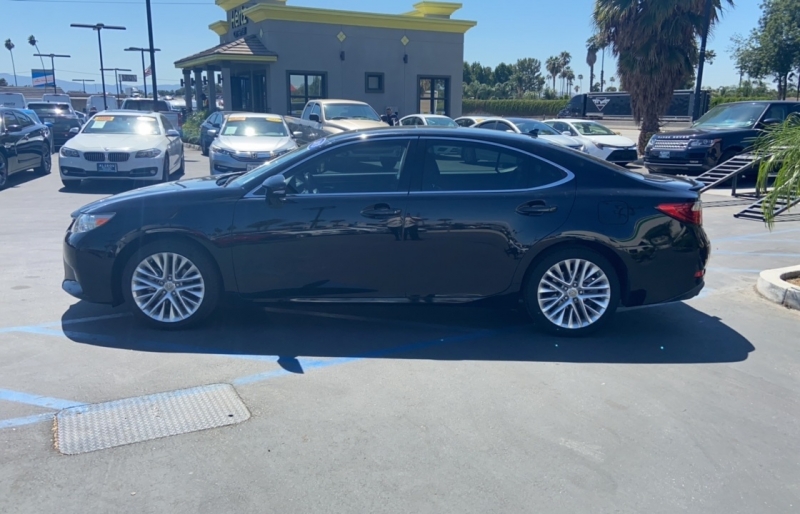 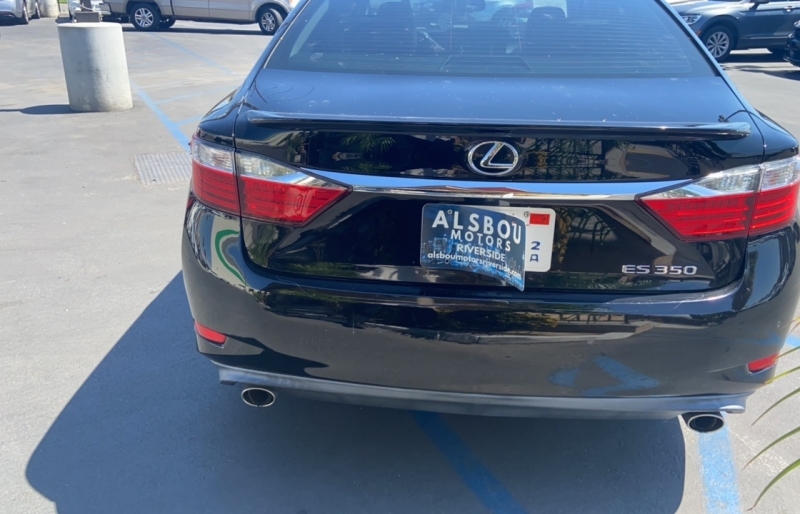 SUPER SUPER CLEAN INSIDE OUT. BAD CREDIT, NO CREDIT, ITIN, SSI, SELF EMPLOYED WE CAN HELP YOU GET FINANCING TODAY. GIVE US A CALL NOW 951-977-8679

The 2013 Lexus ES 350 remains the standard-bearer for a relaxed, luxuriously insulated form of transportation. The competition has narrowed the gap over the years, though, so it's hardly your only option for an entry-level luxury sedan.

The Lexus ES has always been a car whose loyal owners simply trade in one for another when it's time to buy another car. Each generation has been designed to a familiar formula of ample midsize proportions, solid reliability, simple controls, a comfy ride and enough luxury features and ambience to justify its price over the mechanically related Toyota Camry. Well, the 2013 Lexus ES 350 represents a new generation. Does it carry on the family line?

There are no worries here, because the new ES 350 maintains that familiar formula. Even its exterior styling is an evolution of the previous car. Lexus has adopted some styling cues from the new GS, but the ES's silhouette is instantly familiar. The interior is a more radical departure, however, as the anonymous design of the old car has been replaced with a far more modern and visually interesting one. The controls are a little more complicated than before -- especially with the love-it or hate-it Remote Touch electronics interface -- but that's simply a result of the increased number of electronics features that must be controlled.

Mechanically, the new ES 350 is once again related to the latest Toyota Camry, but is now closer in size to the also-related Toyota Avalon. All three cars share various engine and other mechanical similarities, but the differences are sufficient enough to disprove the common refrain that the ES 350 is just a Camry with a Lexus badge. More importantly, the ES 350 boasts a more structurally rigid body than before as well as suspension and steering changes. This makes it feel more buttoned-down and solid, while also more responsive to driver inputs. The ES 350 has always been both appreciated and admonished for the isolated way it goes about its business, and we doubt that will change. However, the new car makes the driver feel a little more in control -- especially when the new Sport mode is engaged -- and that should always be considered a good thing.

In total, the 2013 Lexus ES 350 should continue to please its loyal customer base while being updated enough to remain relevant in this competitive entry-level luxury sedan segment. The old car was getting very stale, and those willing to look around a bit were likely to find the Buick LaCrosse and Hyundai Genesis provided a similar formula with plenty of advantages -- price being the primary one. The new-for-2013 ES 350 has caught up in most respects, but those aforementioned rivals and the Acura TL should still be considered. Whether you're on your sixth ES or a first-time shopper, the ES is no longer our automatic pick in this class, and this has everything to do with the strength of the competition.

The 2013 Lexus ES 350 is a midsize luxury sedan that seats five people.

The Lexus Display Audio package adds a large central screen, the Remote Touch electronics interface, a rearview camera, Bluetooth phone and audio connectivity, and HD radio with iTunes tagging. The Navigation package includes all of the above items plus a navigation system, voice control, real-time traffic and weather, and the Lexus Enform suite of Internet-based apps. A 15-speaker Mark Levinson surround-sound audio system can be added to the Navigation package.

To the Display Audio and Navigation packages you can add the Premium package, which adds a power-adjustable steering wheel, driver memory functions, leather upholstery, real wood trim and a wood-trimmed steering wheel. Or, you could add the Luxury package, which includes all of the Premium items plus xenon headlamps, parking sensors, extended leather trim, heated and ventilated seats, and a power rear sunshade. The Ultra Luxury package goes one step further by adding a panoramic sunroof, a power-closing trunk, automatic wipers, a 10-way power driver seat, passenger seat memory functions, manual rear door sunshades, a heated steering wheel, ambient lighting and the Mark Levinson system. This package requires the choice of either special 17- or 18-inch wheels.

The Lexus ES 350 has been completely redesigned for 2013. It has been joined by the ES 300h hybrid model.

The 2013 Lexus ES 350 is powered by a 3.5-liter V6 engine that produces 268 horsepower and 248 pound-feet of torque. Front-wheel drive and a six-speed automatic transmission are standard. In Edmunds performance testing, the ES 350 went from zero to 60 mph in 6.5 seconds, which is on par with its competitors. EPA-estimated fuel economy is 21 mpg city/31 mpg highway and 24 mpg combined.

Optional equipment includes parking sensors, a lane-departure warning system and a blind-spot monitor that includes a rear cross-traffic alert system. The optional adaptive cruise control includes the pre-collision system, which primes the seatbelts and brakes when it senses an impending collision.

In Edmunds brake testing, the ES came to a stop from 60 mph in 124 feet, which is average.

The 2013 Lexus ES 350 delivers a refined driving experience that's bolstered by a V6 engine that's smooth and responsive. No one will ever deem the new ES sporty, but few people will expect it to be. Instead, this year's more precise steering response and feel is a welcome improvement that everyone should appreciate. The ES's Sport mode further sharpens steering and throttle response, but the resulting driving experience feels like it would be a normal mode in many other cars. The actual "Normal" mode would be a comfort setting.

At highway speeds, the cabin remains remarkably silent, mostly devoid of wind, road or engine noise. Bumps and ruts in the road are now better absorbed than before, but don't expect complete isolation or the floating sensations many assume the ES exhibits.

The 2013 Lexus ES 350's cabin is a far more modern, stylish environment than that of past models. There's still wood trim on hand, but it's more subtly applied and looks more like the genuine article. The analog clock in the center of the dash is a classy touch that breaks up the otherwise high-tech environment. Of course, the quality of materials depends on whether you opt for one of the luxury packages, but build quality is excellent in typical Lexus fashion.

The climate controls are still quite simple to use, but those for the audio system have become more complicated due to the increased number of available media types. When you opt for the Display Audio or Navigation package, you get the Lexus Remote Touch system, which is essentially a mouselike device that controls a cursor on a large centrally located screen. We've found this interface to be likable in that it's very similar to using a computer mouse, but the ultra-sensitive nature of the controller can be distracting while driving, and we recommend playing around with it before taking an ES 350 home.

Space is ample all around, with the ES 350 coming closer to the Avalon in size than the Camry to which it has traditionally been compared. Backseat legroom, in particular, is very impressive, but taller occupants will find their heads touching the roof in ES 350s equipped with the optional panoramic sunroof. The trunk offers 15.2 cubic feet of space, which is average for a midsize car. The rear seats do not fold down, however, and only a pass-through is offered.