LONG BED LOW PRICED TRUCK!
Save this car Email Us Book a test drive Get e-price Get Finance Print 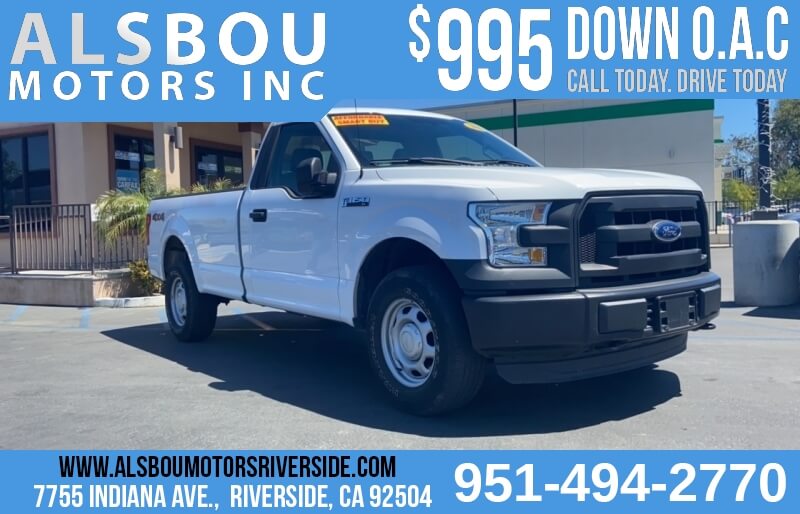 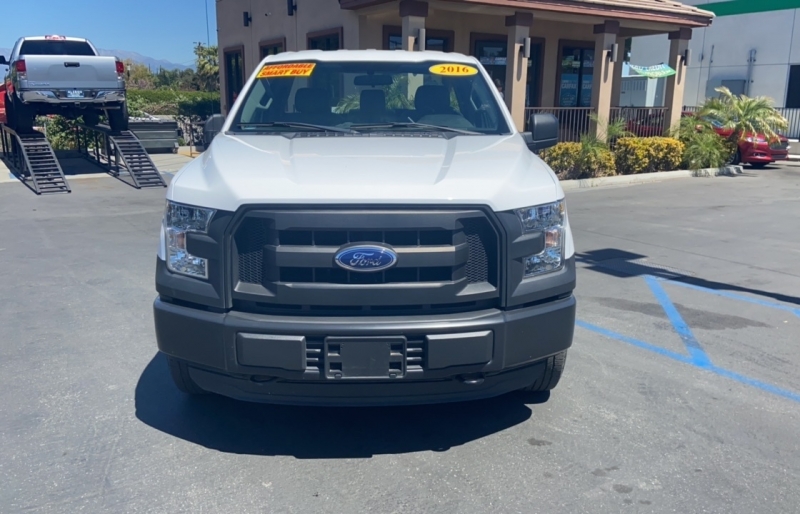 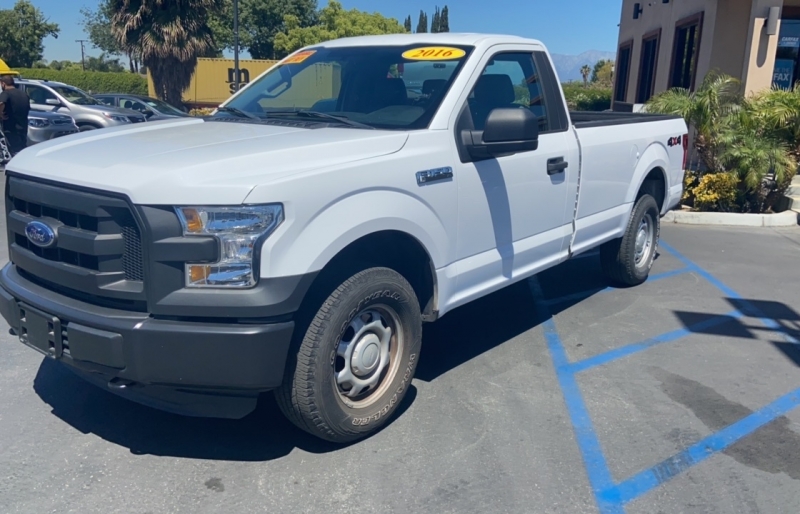 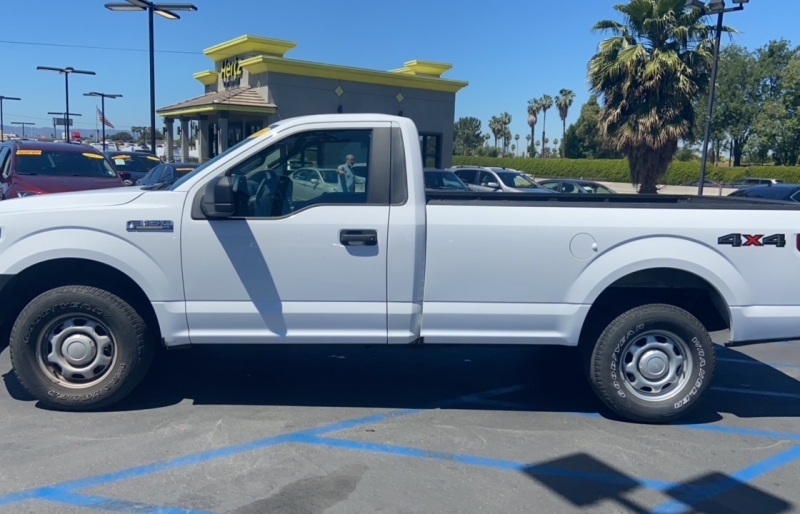 SUPER SUPER CLEAN INSIDE OUT. BAD CREDIT, NO CREDIT, ITIN, SSI, SELF EMPLOYED WE CAN HELP YOU GET FINANCING TODAY. GIVE US A CALL NOW 951-977-8679

After one of the most significant redesigns in the model's long history, the 2016 Ford F-150 returns with a few notable improvements. Ford's new Sync 3 replaces the often criticized MyFord Touch system, providing an interface that's easier to use and quicker to respond. Also new to the lineup is a range-topping and luxurious Limited trim, while a compressed natural gas or propane conversion will be available for the 5.0-liter V8 later in the year.

The 2016 Ford F-150 is offered in a new Limited trim that takes this truck's luxury to a new level.

Otherwise, the 2016 F-150 is largely unchanged, and that's a good thing. The use of lighter aluminum body panels instead of steel benefits both fuel economy and payload capacity, and these panels are also surprisingly resilient. They're more expensive to repair, though, and while we're nitpicking, the F-150 can't match the supple ride of the Ram 1500. But this Ford has so much else going for it that many shoppers will likely forgive such minor shortcomings.

As always, the F-150's diverse lineup ensures that there's a pickup for all tastes and needs. From the bare-bones basic XL to the luxurious Platinum and Limited trims, there's a good chance there's a truck for you. A dizzying list of options and three body styles and bed lengths further drive this point home. And if you need serious workhorse capabilities, know that the F-150 is at or near the head of the class by almost every measure.

As good as the 2016 F-150 is, it does face stiff competition. We awarded a Supercrew with the V8 engine an Edmunds "A" rating, but a couple of 2.7-liter V6 models managed only a "B" rating. The Ram 1500 also received an "A" rating, making it the Ford's strongest rival, while "B"-rated trucks like the Chevrolet Silverado 1500 (and its GMC Sierra twin) and Toyota Tundra are certainly worth considering. Then there's the new Nissan Titan XD, which toes the line between full-size and heavy-duty trucks and is showing some early promise. It's hard to go wrong with any of these trucks, but the 2016 Ford F-150 clearly enjoys one of the top spots in this segment.

The 2016 Ford F-150 is a full-size pickup truck that is available in three cab styles: regular, Supercab (extended) and Supercrew (crew cab). There are three bed lengths offered, depending on which cab style is chosen: a 6.5- or 8-foot bed is available on regular and Supercabs while the Supercrew is eligible only for a 5.5- or 6.5-foot bed. Finally, there are six trim levels to choose from: XL, XLT, Lariat, King Ranch, Platinum and a new Limited.

New for 2016, the Backup Assist system literally takes the wheel out of your hands. Just watch the trailer in the rearview camera and "steer" with this knob.

High-end versions of the 2016 Ford F-150 have become honest-to-goodness luxury vehicles on the inside.

In addition to many of the options offered on the XLT, the Lariat is also eligible for the 502A package that includes LED headlights and taillights, a remote tailgate release, automatic high beams, automatic wipers, front-facing spotlights, a heated power-adjustable steering wheel, front bucket seats and an 11-speaker Sony audio system. Other options include lane-departure prevention, a surround-view camera system, an automated parallel-parking system and adaptive cruise control with frontal collision warning.

The King Ranch trim is only offered as a Supercrew and adds a Western styling theme inside and out, as well as items like an integrated trailer brake controller and heated rear seats. The Platinum adopts a more contemporary luxury style with features that include 20-inch wheels, power-deployable running boards and aluminum interior trim. At the top of the range is the new Limited trim, which comes generously appointed with 22-inch wheels, unique styling details and many of the convenience options as standard.

Many of the standard and optional features on fancier F-150 models are available on lesser trims.

Ford's new and improved Sync 3 infotainment system is now available for the 2016 F-150, as is a luxurious Limited trim, while the Pro Trailer Backup Assist feature simplifies backing up a trailer.

The 2016 Ford F-150's base engine is a 3.5-liter V6 that produces 282 horsepower and 253 pound-feet of torque. The EPA estimates fuel economy for this engine at 20 mpg combined (18 mpg /25 highway) for the rear-drive version. Four-wheel drive drops the estimate to 19 mpg combined (17 city/23 highway). A six-speed automatic transmission is the only choice for all F-150 models and features a tow-haul mode.

Upgrading to the turbocharged 2.7-liter V6 increases output to 325 hp and 375 lb-ft of torque. Fuel economy is estimated at 22 mpg combined (19 city/26 highway) with RWD and 20 mpg combined (18 city/23 highway) with 4WD. In Edmunds testing, this engine propelled a 4WD Supercab F-150 to 60 mph in a remarkably quick 6.0 seconds, while a 4WD Supercrew turned in an equally impressive 6.4-second run.

Although the 5.0-liter V8 isn't turbocharged, it's a smart choice for both its towing prowess and fuel economy estimates that are attainable in the real world. It produces 385 hp and 387 lb-ft of torque and is rated by the EPA to achieve 18 mpg combined (15 city/22 highway) with RWD and 17 mpg combined (15 city/21 highway) for 4WD. In Edmunds testing, a 4WD Supercrew with the V8 reached 60 mph in 6.9 seconds — a solid result compared to rivals, but a bit disappointing in light of the 2.7-liter V6's performance. Later in the model year, buyers can also select a compressed natural gas- or propane-fueled version of this V8.

Ford's MyKey system is standard on the XLT and above. It monitors the vehicle and allows owners to set certain limitations and alerts for valets and teen drivers. Rearview and surround-view cameras are available, as are rear parking sensors. Optional advanced features include a forward collision warning system that also pre-charges the brakes for maximum responsiveness, a blind-spot monitor, rear cross-traffic alert, lane-departure prevention and inflatable rear seatbelts.

In Edmunds brake testing, current F-150 test vehicles have generally needed 126 to 132 feet to stop from 60 mph, which is about average for the segment. However, the abovementioned 4WD Supercrew with the turbocharged 3.5-liter V6 stopped in a jaw-dropping 117 feet despite being the heaviest of the lot at 5,581 pounds.

The 2016 F-150 also gets high marks in government crash tests, receiving five out of five stars for overall, frontal and side-impact protection and four stars for rollover protection.

Despite its large proportions, the 2016 F-150 is a reasonably agile beast. With potent power coming from all but the base engine, accelerating up to highway speeds or passing slower traffic is reassuringly easy. Rearview and surround-view cameras make backing into a tight parking spot a stress-free affair, while the nifty Pro Trailer Backup Assist system even takes the guesswork out of backing a trailer.

The F-150 certainly isn't sized for city living, but this truck is quicker and more maneuverable than you'd think.

The F-150's ride quality is generally agreeable for a big truck, even when there's no cargo in the bed to settle down the rear suspension. Still, the Ram 1500's coil-spring rear suspension has been spoiling truck buyers for years now with its luxury-car smoothness, and the Ford falls short of that standard. Running boards and the low-hanging front air dam limit off-road clearance, but the air dam is easily removable and power-deployable steps are available. At the end of the day, the 2016 Ford F-150 is simply an all-around strong performer, with a good balance of comfort, utility and performance.

In XL trim, the 2016 F-150 is as basic as pickups get, with vinyl floors and hand-cranked windows, but this is to be expected from a work truck. As you move up the trim levels, the interiors get progressively nicer, reaching downright luxurious accommodations in the Lariat model and above. While there's still an abundance of hard yet sturdy plastics, most every surface that you'd frequently touch is padded.

The control layout is logical and easy to read at a glance, and Ford's new Sync 3 infotainment system is far more user-friendly than the much-maligned MyFord Touch system, featuring pinch-and-swipe gesture capability and a simplified menu along the bottom of the screen. The more advanced driver information displays provide a wealth of customization and vehicle information.

As expected, higher-trimmed F-150s provide excellent long-distance comfort, bolstered by additional seat adjustments and ventilation. Supercrew models deliver similar levels of comfort for rear passengers. Elsewhere in the cabin, there is plenty of storage for personal items, especially in trucks with the front bucket seats and large center console. Supercab and Supercrew models also benefit from additional storage under the rear seats.